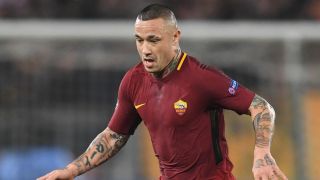 Radja Nainggolan used social media to apologise to supporters for his error in Roma's Champions League semi-final exit to Liverpool.

Nainggolan scored a late brace as Roma fell short of the Kiev final despite Wednesday's 4-2 victory at the Stadio Olimpico, where Liverpool prevailed 7-6 on aggregate.

Needing to overturn a 5-2 first-leg defeat, Roma's hopes of a stunning comeback were dashed after Nainggolan's back-pass gifted Sadio Mane and Liverpool the opening goal of the night in the Italian capital.

And Roma star Nainggolan issued an apology to fans via Instagram, writing: "I'm proud to be part of this team.

"I'm sorry for the error that weighed heavily on the final result… We go forward… #dajeroma."

It was an eventful night in the Eternal City, where Roma only fell one goal short of forcing extra time against their Premier League opponents.

Mane's ninth-minute opener was cancelled out by a James Milner own goal six minutes later.

Georginio Wijnaldum restored Liverpool's lead on the night approaching the half-hour mark before Roma scored three unanswered goals in the second half courtesy of Edin Dzeko and Nainggolan.

Roma were left aggrieved afterwards, president James Pallotta and sporting director Monchi both demanding the introduction of the video assistant referee (VAR) in the Champions League after Trent Alexander-Arnold's handball inside the penalty area went unnoticed.

Dzeko was also incorrectly flagged for offside before he was brought down by Liverpool goalkeeper Loris Karius.

On the Alexander-Arnold incident which prevented Stephan El Shaarawy from scoring in the second half, Roma veteran Daniele De Rossi told Mediaset Premium: "I saw the handball clearly, looked around and thought maybe I was seeing things. I asked Edin Dzeko on the corner, he didn't see, so I stayed quiet.

"I was right there, I saw it immediately, but if it was just me in a stadium of 60,000, it can't have been that easy for the referee to see it either. It makes no difference what I think, anyway. I thought at the time Dzeko was clearly offside on the other penalty, yet we saw later that he wasn't.

"The penalty problem was around the hour-mark and there was a long time to go. It might've changed the inertia of the game, perhaps Liverpool would've gone through anyway, but at least we'd have had the chance."