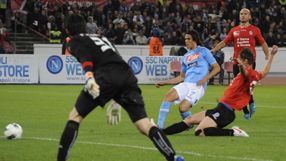 The win meant the Naples club are now a point behind fourth-placed Udinese, who missed the chance to put pressure on Lazio in third after a goalless draw with Chievo in Verona left them two points off the Champions League play-off place.

Napoli easily brushed aside Novara with first-half goals from Edinson Cavani and Paolo Cannavaro and are now in fifth place on 51 points with five games left, one ahead of AS Roma.

Europa League football should beckon for Napoli next term given they face Juve in the Italian Cup final next month and occupy a berth in Serie A but it will be a far cry from their Champions League exploits this term.

Second-bottom Novara, 11 points adrift of safety, now look doomed to relegation after one season in Serie A but the match was almost overshadowed by the bizarre incident with the referee.

The game was stopped less than a minute in when Daniele Doveri injured his right shoulder enthusiastically signalling for a free-kick.

Doveri had to leave the field to be treated but after 18 minutes of confusion in which a reserve official took his time warming up, he returned to the pitch to take charge again.

Despite a moving pre-match tribute, in which the Udinese players linked arms with their Chievo counterparts and wore T-shirts bearing his face amid a minute's applause, they could not honour him with a win.

"At the end of the match I congratulated my players, I couldn't have asked for more. They gave a lot today and kept their concentration for the whole game," Udinese manager Francesco Guidolin told reporters.

"We weren't very incisive, but we'd had a very difficult week - there's nothing else to say."

Catania won a closely fought contest with Atalanta 2-0 thanks to a dipping 30-metre strike from Argentine midfielder Alejandro Gomez 30 minutes in and a scrappy 85th-minute finish from Filipe Seymour.

Parma made light work of Cagliari to win 3-0. The first goal was a stunning Sebastian Giovinco free-kick on 23 minutes which was followed up by two second-half penalties from Sergio Floccari and Stefano Okaka.