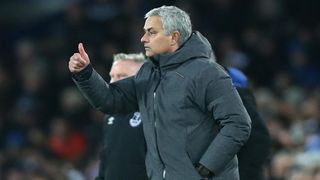 Jose Mourinho believes his "hard work and dedication" have been recognised by the Manchester United hierarchy after signing a new deal at the club.

The Portuguese coach arrived at Old Trafford at the start of last season as Louis van Gaal's successor, winning the EFL Cup, Europa League and Community Shield in his first campaign.

Although United look set to improve upon last season's sixth-place finish, rivals Manchester City have so far made light work of their title challenge this term, sitting 12 points clear after 24 matches.

But the club believe Mourinho has done enough to warrant an extension to a contract which was due to expire at the end of 2018-19.

Mourinho's new deal will take him through to the conclusion of the 2019-20 season and United have the option to extend it by a further year, with the former Chelsea tactician demanding more trophies.

"I feel privileged to work with such a fantastic group of boys."Jose's pride in managing - head this way to hear more from the boss: January 25, 2018

"I am really honoured and proud to be Manchester United manager," he told the club's official website.

"I would like to say a big thank you to the owners and to [executive vice-chairman] Mr [Ed] Woodward for the recognition of my hard work and dedication.

"I am delighted they feel and trust that I am the right manager for this great club for the foreseeable future.

"We have set very high standards - winning three trophies in one season - but those are the standards I expect my teams to aim for. We are creating the conditions for a brilliant and successful future for Manchester United.

"My thanks, of course, go to my staff and to my players; without their empathy and friendship this wouldn't be possible. I love my players and it is a pleasure to know that we are going to be together for at least the next three years.

"And I cannot finish without thanking the fans for their support and for making me feel at home so quickly. I repeat, to be Manchester United manager is an honour every day and I am really happy."