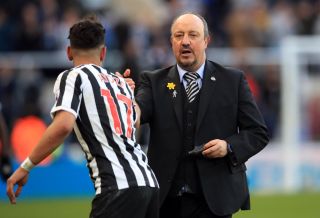 Newcastle boss Rafael Benitez remains relaxed over the future of striker Ayoze Perez despite his compatriot appearing to suggest that the time to leave Tyneside may have come.

The 25-year-old is a player who divides Magpies fans, although his form this season – he has seven Premier League goals to his name including a match-winning double against Everton – has seen him linked with a call-up to Spain’s senior squad and a move back to his native country.

Speaking in a interview with Spanish television programme El Chiringuito, Perez said: “I believe in cycles. I think there is a moment where you plan things, to undergo a change and I think after five years, I think it’s the moment.

“To go back to your country and play for a big team and enjoy LaLiga, would be something great for my career.”

However Benitez, who has been a staunch supporter of a player he believes does not always receive the credit he deserves, insists he has had no indication that Perez is ready to move from St James’ Park.

The manager said: “He is someone you can see who is training well and is focused. When we talk about the future, we talk about doing things here.

“He’s not telling me he wants to go, he’s focused here. If he can see the team is doing well, I think he will be happy.”

Perez, who arrived on Tyneside from Tenerife in June 2014, will have another chance to prove his worth when the Magpies head for Arsenal on Monday, although he will not be joined by defender Fabian Schar.

The Switzerland international is suspended, so would not have been able to play anyway, but has found himself at the centre of a fresh debate over head injuries in recent days.

That came after he was allowed to play on despite being knocked unconscious during his national team’s 2-0 Euro 2020 victory over Georgia last Saturday.

But Benitez was not about to be drawn into a row on the matter.

He said: “I have experience with this sort of thing as a manager. We have to do the tests and be sure that he’s fine, and we’ve done that.