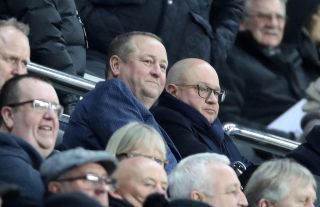 Furious Newcastle owner Mike Ashley is demanding answers after details of a Saudi takeover bid, which had sparked accusations of “sportswashing” by human rights campaigners, were leaked.

The Sports Direct tycoon was back in the country on Monday, two days after the Wall Street Journal reported that the Saudi Arabian Public Investment Fund – controlled by Crown Prince Mohammed bin Salman – was the main player in a consortium which has been in talks with Ashley’s representatives for around four months.

Further details of the £340million proposal, code-named Project Zebra, have emerged amid claims that it is “90 per cent” likely to go ahead.

The group has been assembled by Amanda Staveley, who spearheaded an unsuccessful bid for the club by PCP Capital Partners two years ago – with the Magpies owner accusing her of wasting his time after months of ultimately fruitless discussions, an accusation she strongly refuted.

A frustrated Ashley, who is also in talks with another interested party, was abroad when the story broke and the PA news agency understands he returned to launch an inquest into the leaks having made it plain since Staveley’s first attempt to reach an agreement that any future negotiations must not be played out in public.

Sources close to the sportswear magnate have questioned both the timing and motivation for the briefings, which prompted yet another flurry of speculation around the club, and they remain as sceptical as fans who have seen several proposed takeovers collapse since the club was put up for sale once again in October 2017.

Saudi Arabia has become an increasing presence in international sport in recent months, staging Antony Joshua’s world heavyweight title fight against Andy Ruiz Junior and Spanish football’s Super Cup, and news of interest in Newcastle from the Arab state was met by a strong response from Amnesty International.

Amnesty’s UK head of campaigns Felix Jakens said: “It’s not for us to say who should own Newcastle, but players, backroom staff and fans alike ought to see this for what it is – sportswashing, plain and simple.

“Given the deluge of investment in sport we’ve seen from Saudi Arabia recently, a takeover of Newcastle United wouldn’t come as a major surprise.

“Saudi Arabia is well-known for its attempts at ‘sportswashing’ – trying to use the glamour and prestige of top-tier sport as a PR tool to distract from the country’s abysmal human rights record.

“There’s been a blatant whitewash over Jamal Khashoggi’s grisly murder, there are continuing concerns over Saudi hacking, and the Saudi-led military coalition in Yemen has a bloody record of launching indiscriminate attacks on homes and hospitals.

“The sportswashing effect can be countered if those involved are willing to do so. Staff and fans at Newcastle United should familiarise themselves with the dire human rights situation in Saudi Arabia and be prepared to speak out about it.”

Saudi officials said last year that Khashoggi was killed in a “rogue operation” by a team of agents who were trying to persuade him return to his native country.

Ashley’s controversial near-13-year reign at St James’ Park has pitched him into an ongoing battle with sections of the club’s fanbase, the most vociferous of whom have repeatedly urged him to sell up.

While we welcome interest from potential buyers for NUFC, we remain sceptical about Mike Ashley’s willingness to sell the club.— Toon For Change (@ToonForChange) January 27, 2020

That is a message which has been reiterated by the Toon For Change campaign group, which has questioned his willingness to go given the failure of the Bin Zayed Group and Peter Kenyon-led consortia – among others – to strike a deal in the wake of the weekend’s revelations.

A statement said: “Our message to Mike Ashley: prove the sceptics like us, who believe that you are unwilling to sell our football club, wrong.

“Sell Newcastle United to a party that has the ambition to make us the top-six club we were before you took control. Let us have something to dream about once again.”