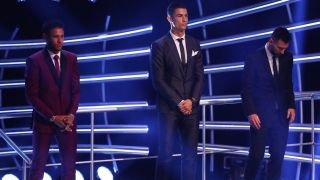 Paris Saint-Germain star Neymar was happy just to be alongside Cristiano Ronaldo and Lionel Messi in finishing third for the Best FIFA Men's Player award.

Ronaldo claimed the prize ahead of Messi for the second straight year, with Neymar third – a spot Atletico Madrid star Antoine Griezmann took in 2016.

Neymar, 25, was delighted to be considered in the same group as Real Madrid's Ronaldo and Barcelona star Messi, widely labelled two players who will go down as all-time greats.

"Congratulations to Cristiano. He deserves it and he has merit to win it," the Brazil international said.

"He is making history and that has to be respected. Both he and Messi are two figures in world football.

"I am happy to be in the same group as them, fighting for the trophy."

Neymar also said he spoke normally to Barcelona president Josep Maria Bartomeu, with whom he was involved in a war of words earlier this year after leaving the LaLiga giants in a world-record deal.