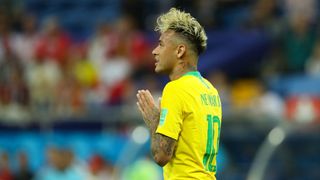 Brazil star Neymar sat out training on Monday following the 1-1 draw with Switzerland in their World Cup opener.

The 26-year-old was fouled 10 times in Sunday's Group E clash in Rostov-On-Don, more than any other player at a World Cup since 1998, as Switzerland looked to limit the impact the of the world's most expensive footballer.

Neymar was making his first competitive appearance since February, having missed the latter stages of Paris Saint-Germain's Ligue 1 title-winning campaign because of a fractured foot, and urged referees to protect him from consistent fouling.

"All I have to do is to play football, or try to do it. It's for the referee to see it. I guess that will be normal [to be fouled regularly], we have to pay attention to it, but that's something normal in football," he told reporters after the match.

Brazil meet Costa Rica on Friday and will hope Neymar is available to fire them to a first victory of the tournament. The Selecao were without their talisman for the World Cup semi-final with Germany four years ago and infamously lost 7-1 in his absence.

Marcelo, Thiago Silva and Gabriel Jesus all trained separately from the rest of the squad.