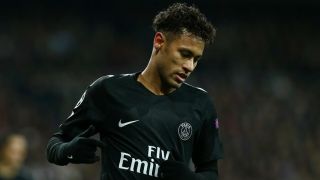 Paris Saint-Germain president Nasser Al-Khelaifi ruled out an exit for Neymar at the end of the season, saying he was "2000 per cent" sure the Brazilian would stay.

Neymar, 26, has been heavily linked with a move to Real Madrid at the end of the campaign despite having spent just a season at PSG.

The Brazil star made a world-record €222million switch from Barcelona to the Ligue 1 giants in August last year.

Despite reports Neymar could return to Spain, Al-Khelaifi said there was no chance of the star forward leaving.

"Who said he cannot stay here? Did anyone say that? Nobody," he told reporters after PSG's 2-0 loss at home to Rennes Saturday.