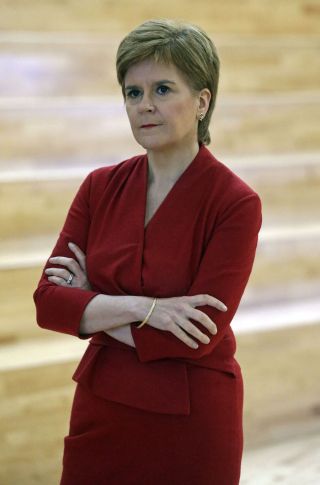 Celtic are set to have upcoming games postponed but First Minister Nicola Sturgeon let Scottish football off with a “yellow card” after Hoops defender Boli Bolingoli played following a secret trip to Spain.

The Scottish Government had earlier admitted it was considering a suspension of football after it emerged Bolingoli failed to quarantine for 14 days as required and then came off the bench during the 1-1 Scottish Premiership draw with Kilmarnock on Sunday.

With talks continuing between the government and the football authorities on Tuesday afternoon, Sturgeon said: “As a minimum, you should not be expecting to see Aberdeen and Celtic play over the course of the coming week and we’ll see what the other conclusions are.”

Celtic have condemned what they acknowledged was inexplicable and “stupid” behaviour from their player but now face an anxious wait to discover the fate of their Champions League first round qualifier against KR Reykjavik on August 19.

Their clash with St Mirren and Aberdeen’s game against Hamilton on Wednesday are set to be called off along with the Dons’ trip to Parkhead on Saturday.

Sturgeon had issued Scottish football with a stark warning on Friday after eight Aberdeen players broke protocols with a night out following the opening day of the season – two of them caught Covid-19 and a further six were instructed to self-isolate. The Dons’ weekend game against St Johnstone was postponed.

Sturgeon stressed she did not want rule-abiding clubs and players plus fans to be punished for the individual breaches but warned: “Consider today the yellow card. Next time it will be the red card because you will leave us with absolutely no choice.”

A statement from the Scottish champions read: “Celtic Football Club unreservedly condemns and apologises for the behaviour of the player Boli Bolingoli in travelling to Spain without informing the club and in failing to observe quarantine restrictions.

“It is difficult to imagine a more irresponsible action in current circumstances and we find it beyond explanation. The club will take immediate action through our own disciplinary procedures.

“Celtic are in touch with every SPFL club today, and with all relevant authorities, to apologise for the fact that one of our employees has created so much additional difficulty through his actions.

“All of our playing and backroom staff have been tested twice for Covid-19 since this incident and all, including the player in question, have tested negative. While this comes as a relief to all concerned, it in no way diminishes the seriousness or stupidity of the player’s actions.

“Since the Covid-19 crisis began, we have had a safe and healthy squad of players, recording not one positive test. As a club, we have worked tirelessly to ensure a sustained, safe environment for all.

“We have led the way in working with the football authorities and Scottish Government to establish the most rigorous, effective protocols and working practices, which ultimately led to the resumption of football. We could have done no more in this area.

“It is a matter of the deepest regret to us that the behaviour of one individual has jeopardised that reputation and reflected discredit on football more generally.”

Motherwell manager Stephen Robinson had argued it would be wrong to shut down an industry for individual mistakes.

Robinson said: “People will lose jobs, the industry will go to pieces, make no mistake about that. I just don’t think in any shape or form Scottish football should be closed down. It’s individual errors, if they are true.

“I see from every club and every person I speak to in Scottish football, we are doing more than any other industry, 10 times more, but it doesn’t sell papers.

“When one person makes a mistake it goes all over the place and gets exaggerated tenfold. I am not condoning anything that happened but it is being dealt with.”