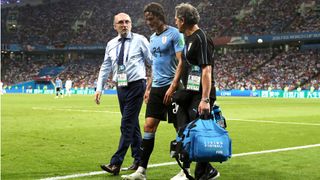 Edinson Cavani has been left out of Uruguay's starting XI for the World Cup quarter-final against France.

The Paris Saint-Germain striker has been struggling with a calf problem this week and only resumed team training on Thursday.

Oscar Tabarez has opted to leave Cavani on the bench for Friday's game in Nizhny Novgorod, with Cristhian Stuani, who came on to replace him in the last-16 win over Portugal, taking his place in the team.

Uruguay's line-up is otherwise the same that started that 2-1 victory in Sochi, while France have also made only one change to the team that beat Argentina 4-3 in the last round, with Corentin Tolisso replacing the suspended Blaise Matuidi.