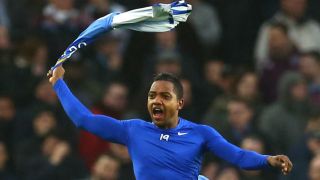 Izquierdo gave Brighton the lead for a second time in the 59th minute, the Colombian producing a curling finish reminiscent of his effort in his side's 3-0 victory in the reverse fixture at the London Stadium last year.

Pascal Gross added a third to secure all three points for the hosts, who had seen Glenn Murray's early opener cancelled out by Javier Hernandez's goal in a see-saw first half.

Moyes - who handed a debut to new signing Jordan Hugill off the bench - was gracious in defeat, accepting Brighton deserved to complete the league double over his injury-hit side.

"We didn't play well all game but certainly not in the second half," he told Sky Sports.

"We never really got to the pitch of the game - Brighton were at it from the start.

"We're missing a few key players but I wouldn't use that as an excuse because that's football and we have players to come in. We hope we get those injured players back soon though.

"We've had a good run and moved ourselves away from the bottom but things are tightening up again."

Opposite number Chris Hughton felt Izquierdo's glorious effort not only changed the scoreline but also the mood inside the ground.

"That goal lifted the stadium. Whatever goal gets us the lead is important but when it's as good as that it lifts everyone on the pitch and in the stadium," Hughton told BBC Sport.

Brighton are now level with West Ham on 27 points in a congested bottom half of the table, with 19th-placed Huddersfield Town trailing Watford - who sit 11th - by just three points.

Hughton praised his players after they clinched their first league victory in 2018 - and called on them to use the performance as a template as they attempt to avoid a quick return to the Championship.

"The most pleasing thing was that at 2-1 we could've been nervous and sat back on it but we didn't. We took that third chance and was a very big goal that releases any pressure we could've been under at the end," he added.

"If we can put in more performances like this before the end of the season, then we'll be okay."