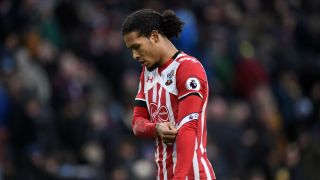 Southampton manager Claude Puel insists his decision to give Virgil van Dijk the captain's armband has not been made in a bid to persuade the Dutch defender to remain at St Mary's Stadium.

But the Netherlands international has been persistently linked with a move away from the south coast and counts Liverpool, Manchester United and Manchester City among his reported admirers.

"We haven't given him the captaincy just so that he will stay here," Puel stressed ahead of Southampton's EFL Cup semi-final second-leg clash with Liverpool.

"When Jose hasn't played, we've had Virgil, Steven or Maya Yoshida – we had different captains.

"I think it's normal for me to give this possibility to Virgil because he is an example on the pitch.

"I think they are two men with good values and an example every time in the training sessions, on the pitch and in the dressing room."

Puel could be forced to select a third captain as Southampton defend a 1-0 lead at Anfield on Wednesday, with both men carrying knocks, but the Frenchman is confident in the leadership qualities throughout his squad.

"Different players can have an importance on this squad – Ryan Bertrand, Maya Yoshida, James Ward-Prowse," he added.

"He's a young player but he knows this role and this mentality with the [England] Under-21s. I think we have a good squad and different players can bring the good message."

Discussing Fonte's departure for a reported £8million, Puel commented: "It's been a difficult situation since the start of the season with discussions about his contract. It is always difficult.

"It was difficult to play with all these things in his head.

"We wish Jose all the best because he was a good captain for Southampton."