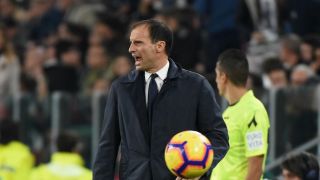 Juventus head coach Massimiliano Allegri was unimpressed despite watching his team chalk up their 10th win in 11 unbeaten Serie A matches this season – claiming the defending in their 3-1 win over Cagliari "just isn't good enough".

The Scudetto holders got off to a flyer, with Paulo Dybala scoring inside the opening minute but Cagliari levelled after the half hour through Joao Pedro.

A Filip Bradaric own goal quickly restored Juve's advantage but they endured some nervy moments before substitute Juan Cuadrado settled the issue three minutes from time.

"We have to defend better, as we concede too many goals and risked letting in an equaliser at the 85th minute," Allegri told DAZN.

"Defending like this is tiring and we have to work harder to prevent these situations.

"This just isn't good enough. Even after the first goal we didn't add a second and drifted out of the game.

Allegri went on to confirm he has two fresh injury concerns to contend with ahead of Wednesday's Champions League home game against Manchester United.

Cuadrado came on at half-time for Douglas Costa, who had a sore groin, while playmaker Miralem Pjanic made way for Alex Sandro due to soreness in his hip flexor.

Allegri added that Blaise Matuidi's late withdrawal was merely down to tiredness.