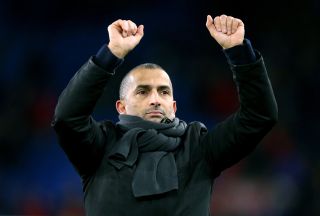 Sabri Lamouchi has been rewarded for his promising start as Nottingham Forest head coach with a new contract.

Lamouchi was appointed last summer following the sacking of Martin O’Neill and the former France international has settled quickly to his new role, winning the Championship manager of the month award last September and in January.

With Forest fifth in the standings, the club’s hierarchy have seen fit to award the ex-Ivory Coast and Rennes boss a fresh deal – the length of which is undisclosed – on the eve of the second tier’s restart.

Lamouchi said on the club’s official website: “I am honoured to be staying at this fantastic football club. It was always my intention to stay here for a long period when I signed last year.

“We have started to build a good team with fantastic characters and I am so pleased to be able to continue on my journey with them.

“I feel humbled by the level of support the fans have shown me since I arrived on day one and I am truly grateful for this.

“I am also thankful for the backing of our owner, Mr Marinakis, whose support for both myself and the team has been exceptional from the very beginning.”

Forest will travel to Hillsborough to take on Sheffield Wednesday on Saturday afternoon in both sides’ first match in three months.