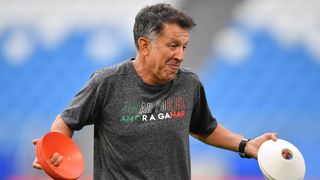 Mexico coach Juan Carlos Osorio described Brazil as "the best team in the world" but insisted his side would not take a backward step in Samara on Monday.

The two nations meet in the World Cup last 16, the stage at which El Tri have fallen in each of the past six tournaments - giving rise to the so-called "curse of the fifth game".

Five-time champions Brazil are touted as many people's favourites to claim a sixth crown in Russia, and Osorio was fulsome in his praise of Tite's men in his pre-match media conference on Sunday.

But he promised an attacking approach from his side, who finished second in Group F thanks to wins over Germany and South Korea.

"Brazil are a great team, they're the best team in the world," Osorio said. "That is because each of their players can control, pass and they behave as a unit just like Spain, Germany.

"Tite is extremely experienced and an excellent coach. He knows how to combine his players, and I think this will be a great chance for Mexico to play the best team on the planet in the last 16.

"Our footballing style has more to do with creating defensive problems in the opposition line. We never throw in the towel and give up on attacking.

"We'll always have a line-up that at very least will have five attacking players, or four attackers and two false nines such as Hector [Herrera] and we know what players we have from the midfield.

"And we always know Brazilian wingers and wing-backs can attack and we'll try to take preventative measures and also to take advantage of that side of their play.

"Hopefully we'll have a great game tomorrow and I hope my players will shoulder the emotional burden and compete on an equal footing with one of the best, if not the best, team in the world."

Sat alongside Osorio, Porto midfielder Herrera said Mexico's squad are full of belief they could finally overcome the second-round hoodoo.

"I think we can win because we trust ourselves and we trust our work, our high quality," he said.

"We're an excellent group, we're very united, excited and happy and all those characteristics lead us to believe we can achieve great things together.

"We want to grow as a country, as players, as individual people and I think all that makes us really strong.

"We really trust ourselves, each other, our coach and the technical staff. All that is really important and that can lead us beyond what we have achieved before."