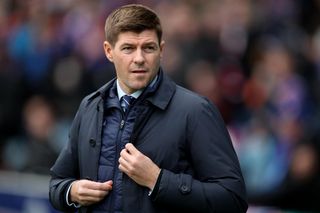 Steven Gerrard admits his Rangers side need to rediscover their spark quickly after they suffered another setback in the title race.

Rangers were held to a goalless home draw by Aberdeen to make it five Ladbrokes Premiership points dropped inside a week.

The Light Blues struggled to get going until about half-an-hour in and Aberdeen goalkeeper Joe Lewis denied them on several occasions, notably when he saved one-on-one with Alfredo Morelos.

But the Dons also had a number of opportunities. Sam Cosgrove passed up two excellent chances and Allan McGregor made good saves from Lewis Ferguson and Ash Taylor.

Gerrard, who was highly critical of his side after last weekend’s defeat by Hearts, said: “I think as a whole there wasn’t too much wrong with the performance. We threw everything we had at it.

“I think we are missing a spark in the final third. Not just today, over the four games we have come back.

“Having said that, we still had some big moments. First half down the right, two v one, Alfredo has got to find Ryan Kent. That was a big moment we should score from.

“And then Alfredo in the second half, 99 times out of 100 he normally wins us the game in that situation.

“We are four points off the top but that’s not important unless we find our spark in the final third. Aberdeen had some moments as well, but I think that came more from us, individual errors that gifted them an opportunity.”

Celtic will go seven points clear if they win at Hamilton on Sunday, although Rangers will have a game in hand.

“We need to find our spark very quickly,” Gerrard said. “And we need to keep going because I believe there will be more twists and turns.

“There’s a few people around he squad who are capable of finding that spark. They need to come with us.”

When asked if they could afford any more slip-ups, Gerrard said: “If you look at Celtic’s form, probably not. But I have been round the game long enough to know that there will be twists and turns. And remember there’s still six points to play for in Old Firm games.”

“If you get a clean sheet at Ibrox with the talent in that Rangers dressing room, then you know you have done a lot of things right, and it was a more than decent performance,” he said.

“We had bags of effort, as we normally get from the boys, a lot of concentration, nice and compact.

“And sometimes when you get chances at a place like Ibrox and don’t take them, it can be demoralising.

“But they never let their heads go down, their shoulders never shrunk, they just kept going at it.

“So it wasn’t perfect because we haven’t won but it was a good performance. We certainly deserved the draw and I thought we had the best chances.”