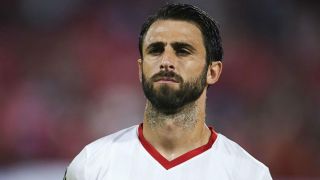 Sevilla defender Nico Pareja has been ruled out for "several weeks" as he prepares for surgery on his pelvis on Thursday.

The experienced centre-back has suffered with problems in that area for most of the year and managed to play through the pain, but his condition worsened in September.

Sevilla revealed on Wednesday that the Argentina international will travel to Barcelona for the surgery, which will be overseen by Dr. Ramon Cugat, who initially advised such action to be taken following previous examinations.

The 33-year-old - who is one of four club captains at Sevilla - has only played two times in LaLiga this term, but coach Eduardo Berizzo's rotation policy has meant that he has started all four of their Champions League games across the play-offs and group matches.

He is expected to miss some crucial games over the coming month, including trips to Athletic Bilbao and Valencia in LaLiga, and the Champions League double-header with Spartak Moscow.

They've given everything for us through the good and bad. Now it's time for us to be there for them. No one gives in here! October 11, 2017

Pareja joins fellow captain and centre-back Daniel Carrico on the sidelines after the Portuguese player was also ruled out for the next few weeks at the start of October after surgery on his quadriceps.