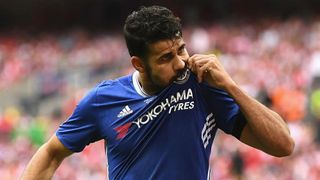 Diego Costa insists he would only leave Chelsea for former club Atletico Madrid and has no interest in moving to the Chinese Super League.

Costa was Chelsea's top scorer as he inspired them to a second Premier League title in three seasons but their campaign ended on a sour note with a 2-1 defeat in Saturday's FA Cup final against Arsenal.

Alexis Sanchez fired Arsenal into a fourth-minute lead despite the champions' protests over handball and offside and, although Costa levelled with his 22nd in all competitions this term after Victor Moses was sent off, Aaron Ramsey sealed the cup for the Gunners 12 minutes from time.

Speculation over Costa's future has remained since a January bust-up with boss Antonio Conte came against the backdrop of mega-money interest from Chinese side Tianjin Quanjian.

The 28-year-old Spain international has two years left on his contract at Stamford Bridge and told reporters after the cup final that a move to the Chinese Super League would jeopardise his chances of being involved in the 2018 World Cup.

New rules introduced by the Chinese FA placing a 100 per cent "tax" or adjustment fee on foreign signings made by loss-making clubs could be another reason for insisting there is no future for him in Asia.

"There is only one team [Atletico] I could go," he said. "I have no intention to leave, I'm good here, I have two years left.

"But if the club wants to sell me, I have made clear that there is only one club I would go.

"I'm good, I'm good here. People talk too much about China. There's a World Cup and if I go to China I won't play it.

"I will stay if I see the club and the manager wants to keep me. If they want to sell me to bring in another striker, I'll go but there is one club for me to go."

But despite retaining his affection for the club he helped to unexpected LaLiga glory in 2013-14, Costa maintains he has not held discussions over a return to the Spanish capital.

"I haven’t had any talks with Atletico," he added. "If I am going to change to a country that is not Spain, I wouldn't go."