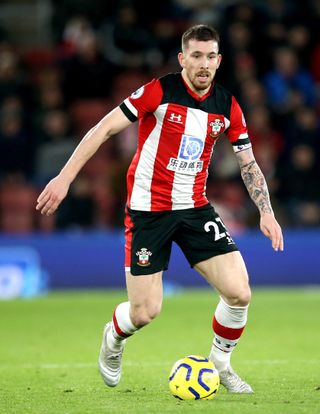 Pierre-Emile Hojbjerg underwent a medical at Tottenham on Monday ahead of his proposed transfer from Southampton.

The Denmark international was at the club’s Hotspur Way training complex to undergo health checks, the PA news agency understands.

Hojbjerg is primed to join Spurs for a reported initial £15million, which could rise to £19m, with right-back Kyle Walker-Peters set to go the other way in a separate deal.

Hojbjerg was stripped of the captaincy at the south coast club after he informed them he would not be signing a new contract and spent much of the resumption of the 2019/20 campaign out of the side.

There was interest from Everton, but the midfielder was keen to work with Jose Mourinho at Spurs, who look to have got the deal done in an uncharacteristically swift manner.

Hojbjerg arrived in England in 2016 from Bayern Munich, where he also worked under Pep Guardiola and impressed at St Mary’s, soon taking on the armband.

But with his contract running out next summer, he informed the club that he would not be renewing terms and Southampton have now cashed in.

What a way to finish the season! 7 games unbeaten, great team effort all round! Shame the season has to end now but time to recharge and get ready for next season! #SaintsFCpic.twitter.com/JnUk8XMZgY— Kyle Walker-Peters (@KWPeters) July 26, 2020

Hojbjerg has been intent on joining Spurs, liking several social media posts linking him with the club and the deal could be completed in the next 48 hours.

Walker-Peters’ move is a separate transaction as Saints look to make his loan into a permanent transfer – a deal which is still being finalised.

The right-back spent the second half of last season on loan with Ralph Hasenhuttl’s men and impressed, prompting Southampton to pay a reported £12million for his services.