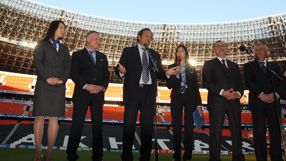 Earlier this year Ukraine had risked losing its right to stage the event, the first to be held in eastern Europe, as a financial crisis threatened the building of stadiums, roads and hotels and preparations were behind schedule.

But it got a glowing report from Platini on Tuesday.

"Many European countries thought it was a bit early for Ukraine to host the tournament. I did too and this year we were even questioning whether we were going to stay with Ukraine," Platini told a news briefing in the Ukraine capital.

"But now all cities have done a great job and are almost ready," he said.

"Major problems are in the past. There are only some little details to be settled... I will tell my colleagues from the executive committee of UEFA that Ukraine is ready and we will have a great Euro 2012," he said.

The chief of the European football body particularly praised work on Kiev's Olympiyskiy stadium - the venue for the final - where reconstruction work had been five months behind schedule at one point.

After inspecting the stadium, Platini said it was also ready to be officially unveiled.

"The stadium is in good condition. Some things have still to be completed, but everything will be ready in time," he said.

Sixteen teams will take part in the finals which will be held from June 8-July 1 next year.

Defending champions Spain, Germany, Italy and the Netherlands have all booked their places alongside Poland and Ukraine and the rest of the qualifiers will be known by November.

Kiev, Donetsk, Lviv and Kharkiv are staging matches in Ukraine, with Wroclaw, Poznan, Gdansk and Warsaw, where the opening game takes place, the hosting cities in Poland.

The draw for the finals takes place in Kiev on December 2.