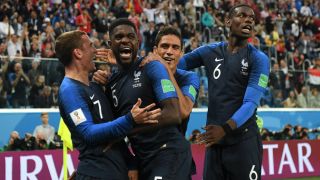 Paul Pogba has urged France not to let an opportunity to win the World Cup pass as Les Bleus booked their place in Sunday's showpiece with a 1-0 win over Belgium.

Pogba, 25, was instrumental in the semi-final win in St Petersburg, as Samuel Umtiti's goal in the 51st minute put the 1998 champions in the World Cup final against the winner of Croatia and England.

The Manchester United midfielder was part of the France squad that lost 1-0 in extra time to Portugal in the Euro 2016 final, and Pogba hopes they can now go one better on Sunday.

"It's beautiful, it's good, but there's still a step," he told L'Equipe.

"Today I'm happy but it's not like the Euros. We had the chance to win the final of the Euros, but we missed a wonderful thing and we must not let this chance pass.

"You have to focus. We savour [the win] a little, but we must now focus on the final. We were there [in 2016], we were close to winning the title and we missed.

"It makes me happy that people are happy, but I hope to make them even happier on the evening of the 15th of July."

Pogba later took to social media to dedicate France's win over Belgium to the football team that was rescued from a flooded cave in northern Thailand.

This victory goes to the heroes of the day, well done boys, you are so strong July 10, 2018