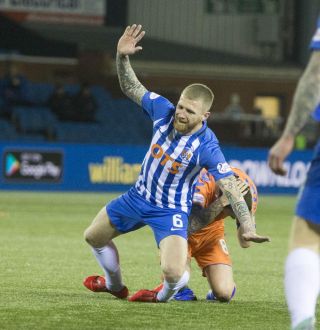 Kilmarnock midfielder Alan Power insists Steve Clarke has got him playing the best football of his career at Rugby Park.

The 31-year-old Irishman joined the Ayrshire club in 2017 from Lincoln and on Thursday signed a three-year extension to his contract which commits him to Killie until  the summer of 2022.

The former Rushden & Diamonds and Hartlepool player praised Clarke for the impact he has had on him since he took over as boss a few months after Power arrived in Scotland.

Ahead of the Ladbrokes Premiership clash with Hamilton at Rugby Park on Saturday, Power said: “I think he has got me playing the best football of my career just by his guidance and by the faith he has in me since he has come in.

“He is hands-on, he will talk to you, guide you, quite simple things but that simplifies the game for you and I think that has helped a lot of lads here.

“It has really helped me over the last year and a half and hopefully I can repay him with a few more good performances.

“I am probably hitting heights I didn’t think I could reach a couple of years ago, playing non-league football.

“I got a good chance to come up to the Scottish Premiership and hopefully I am doing myself some justice.

“I am the fittest I have ever been and hopefully there are a lot more years in me – I wish they had given me a seven-year contract the way I am feeling.”

Speculation abounds about the future of Scotland boss Alex McLeish following the 3-0 defeat by Kazakhstan in the opening 2020 European Championship qualifier, with Clarke widely tipped as a possible successor.

Power’s response to the question about a possible approach in the future from the Scottish Football Association for his manager was, in part, light hearted.

He said: “I think he is more than happy here – I think Kilmarnock is the bigger job.

“There is always going to be talk about our gaffer with (regards) jobs.

“Any job that becomes available, I’m probably thinking that the gaffer is involved in it and should be, he has earned it.

“He has done a great job for us but we will tie him down here. You can see what he is doing for the club and the community.

“We have been improving each year and hoping to get better and better and we can only continue to improve, hopefully under the guidance of the gaffer.”

Fourth-placed Kilmarnock and Accies, who are 10th, have drawn 1-1 in both their previous meetings this season and assistant manager Alex Dyer is predicting another tight encounter.

He said: “We are expecting a good challenge.

“They are a decent side who always pull out good results when they need to.

“It is going to be a tough game, it always is against Hamilton.”