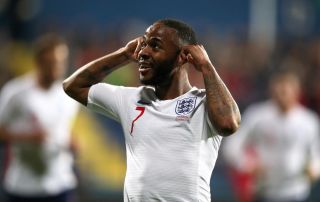 The Premier League has said it would welcome the opportunity to speak to Raheem Sterling and other players about developing ideas to combat racism.

Manchester City and England forward Sterling this week told the Wall Street Journal’s Future of Everything Festival in New York the current campaign does not go far enough.

Instead, the 24-year-old wants to see the introduction of “hard punishments” when incidents occur, and suggested clubs could be docked up to nine points.

Sterling, who has emerged as a key voice in the campaign against racism for his readiness to speak out on the issue, said he would be keen to speak to the Football Association and Premier League over the summer to discuss ideas, a suggestion the Premier League is happy to take up.

A league statement said: “The Premier League and our clubs agree that while good work has been undertaken, more needs to be done to promote inclusion and diversity across football and to ensure BAME fans and players are supported.

“Together, we are also committed to improving pathways to encourage more people from different backgrounds to take up coaching, refereeing and administrative roles in the sport.

“Raheem took part in our No Room for Racism campaign and we would welcome the opportunity to talk to him, and other players, about discrimination in football.

“Developing our work in this area is a priority for the Premier League.”

Sterling was subject to racist chanting during England’s away match in Montenegro in March, and was one of several players allegedly abused by Chelsea fans in December. He said strong punishments were needed in order for the campaign to have a real impact.

“Teams getting (points) deductions, teams getting kicked out… this is when people start taking it seriously,” he said. “If I go to a football game and I support Manchester United, for example, I don’t want to be the person that lets my team down by saying silly remarks in a stadium.

“If you know your team is going to get deducted nine points and not win the league, you are not going to say these racist remarks even though you shouldn’t have it in your head.