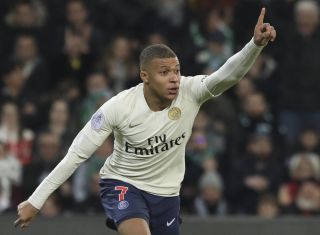 Mbappe’s winner, his 19th Ligue 1 goal of the season, came in 73rd-minute of the contest when the 20-year-old sent a superb volley into the corner of the net.

Tuchel, whose table-toppers are now 12 points clear of second-placed Lille with two games in hand, was quoted by L’Equipe as saying: “I am very happy because I knew very well that it was very difficult to play at St Etienne.

“The field was very difficult to play. My team showed an exceptional mentality.

“We accepted all the circumstances. We’re in the game with our head. We defended with great intensity and vigilance.

“I am very happy. We have been patient, the victory is deserved.”

Regarding Mbappe’s latest goal, five days on from his strike in the 2-0 Champions League win at Manchester United, Tuchel said: “He shows his quality every day in training, he has this hunger to score, score, score. It’s his quality. He is a special player.”

The German added: “Everyone was tired after Manchester United, physically but also mentally. It was necessary to control the game, to play focused. We showed the mentality to win.”

PSG, once again without injured duo Neymar and Edinson Cavani, had gone close to scoring six minutes prior to Mbappe’s goal through Angel Di Maria, and Julian Draxler was denied by a fine Stephane Ruffier save earlier in the second half.

Between those attempts Gabriel Silva shot just wide of the visitors’ goal, and the closest fifth-placed St Etienne came in their search for an equaliser was Kevin Monnet-Paquet driving an attempt over the bar in the 84th minute.

Monnet-Paquet went off two minutes later, and St Etienne boss Jean-Louis Gasset was quoted on the club’s official website as saying: “We are very disappointed, and for two reasons: the defeat, because I think we made a brave match, and the injury of Kevin Monnet-Paquet, which is likely to be very serious.

“We are afraid that the ligaments of the knee are affected.”