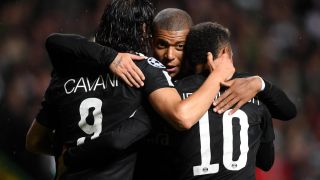 Neymar, Edinson Cavani and Kylian Mbappe will not be rushed back into action after their World Cup exertions, says Paris Saint-Germain coach Thomas Tuchel.

PSG were without their star forward line for a 3-1 International Champions Cup defeat to Bayern Munich on Saturday, although Timothy Weah opened the scoring for the Ligue 1 champions.

Mbappe, crowned the best young player of the World Cup after scoring four goals as Les Bleus triumphed in Russia 2018, said on social media he was tuning into the game from his holiday.

And while Tuchel is excited to have Neymar, Mbappe and Cavani at his disposal for the new Ligue 1 campaign, he is willing to be patient with the trio.

"We have Neymar, Cavani and Mbappe. I'm looking forward to work with these players.

"Unfortunately, we still have to be patient, because the players were far too long at the World Cup.

"Accordingly, they arrive late and the league starts early. That's nothing that pleases a coach."

Despite PSG falling to defeat thanks to a fine Bayern comeback in the second half, Tuchel was happy with his young side's display in Klagenfurt.

"It's a really incredible performance, I'm very proud of what we showed," Tuchel said. "I did not know what to expect from this game. In the field, only [Adrien] Rabiot, [Lassana] Diarra, [Christopher] Nkunku and [Gianluigi] Buffon had experience.

"The rest of the team had never played at this level. We had been put in difficulty during our first oppositions against lower level teams but the players have achieved a superb performance. It's a very good sign for us."

Goalscorer Weah - son of the legendary George Weah - added: "Despite the defeat, we worked well. We had a very young team. Being able to play against a team like Bayern Munich was a great opportunity for us.

"We must now continue to work. I can not wait to see what the future holds, but I'm sure we will win a lot of games. Coming here and doing a good job is an incredible feeling."