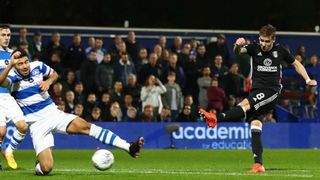 Fulham held off a late QPR fightback to win 2-1 at Loftus Road and hand Ian Holloway's men their first home defeat of the Championship season.

Jack Robinson deflected Ryan Fredericks' shot in for an own goal four minutes before half-time as the visitors moved in front.

Rui Fonte blazed a penalty over the bar for Fulham with seven minutes to go, but redeemed himself by setting up Stefan Johansen to seemingly seal victory two minutes later.

Fulham still had work to do, though, as QPR threatened a fightback.

Substitute Conor Washington scored with a deflected effort two minutes into stoppage time, before defender Tomas Kalas had to clear Matt Smith's header off the line to preserve the points during a frantic finale.

QPR's first loss in front of their own fans leaves them 14th in the table and without a win in five league games. Fulham, meanwhile, are now four better off and move up to eighth, Slavisa Jokanovic's side gaining momentum, having only lost once in seven games.