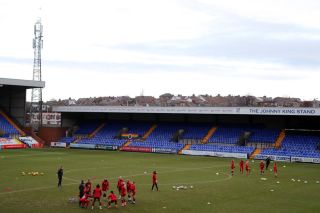 Tranmere’s FA Cup third-round replay at home to Watford has been postponed, the Sky Bet League One club have announced.

The tie, scheduled for Tuesday night, has fallen victim to heavy rain over the last three days and the Prenton Park pitch has become unplayable.

“Tonight’s @EmiratesFACup game against @WatfordFC has been postponed,” Tranmere confirmed on Twitter. “A new date for the fixture will be announced in due course.”

We must add that the ground staff have worked tirelessly, working all hours, over the past few days in attempt to get the game on but were unfortunately beaten by the weather.#TRFC#SWAhttps://t.co/cw4fF2eqqv— Tranmere Rovers FC (@TranmereRovers) January 14, 2020

Further heavy rain is expected with Storm Brendan forecast to hit the Wirral later on Tuesday afternoon, the club said.

Tranmere fought back from 3-0 down to draw 3-3 in the original tie at Vicarage Road 10 days ago.

Micky Mellon’s side are third from bottom in League One, while Premier League side Watford sit one point above the relegation zone.