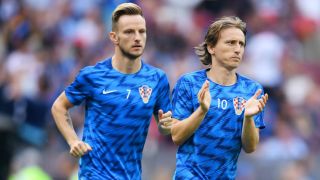 Luka Modric is the best player in the world and should be recognised as such with a Ballon d'Or triumph, according to Ivan Rakitic.

Modric was inspirational in Croatia's run to the World Cup final in Russia, where Rakitic also featured in all seven matches.

The Real Madrid star won the Golden Ball and, with former team-mate Cristiano Ronaldo having left for Juventus, Rakitic believes Modric is not only LaLiga's stand-out talent, but the greatest on the planet.

"Luka is now La Liga's big gun, he is the best player in the world this year and we Croats are very proud of him," the Barcelona midfielder told Novi list.

"I wish that he wins the last prize that is left for him to win [the Ballon d'Or] because he absolutely deserves it.

"Those that are jealous of Luka, let them die in their jealousy. I am proud of him and as happy as if I was winning those awards."

Modric also won the UEFA Player of the Year for 2017-18 after helping Madrid to a third consecutive Champions League crown, while he is on the final three-man shortlist for the Best FIFA Men's Player award along with Cristiano Ronaldo and Mohamed Salah.

Rakitic was linked with a move away from Camp Nou in pre-season, with Paris Saint-Germain said to be interested in his services.

But the 30-year-old insists he is happy to stay with Ernesto Valverde's side.

"I read rumours about my transfer from Barcelona, there were offers, some big clubs wanted me, but, honestly, I spoke to my wife and we made a conclusion I am happy here and proud to be part of this big club," he said.

"I've been part of that nice story with Barcelona for some time and it is not time to leave yet. Well, who could find it easy to leave Barcelona?"