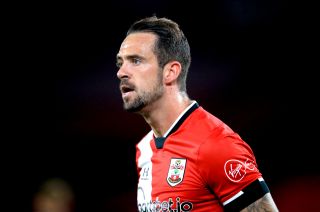 Ralph Hasenhuttl insists Danny Ings has “zero interest” in leaving Southampton and dismissed reports of the player being sold to Tottenham as “absolutely nonsense”.

Saints manager Hasenhuttl hailed the England international as “one of the best strikers in Europe” and was quick to quash the transfer talk.

Ahead of Sunday’s meeting with Jose Mourinho’s men, the Austrian said: “I don’t know how often I spoke last season about Danny Ings, how important he is for our club.

“The only thing I want to say for these rumours is that there’s absolutely zero interest from Danny to go anywhere.

“He is 100 per cent happy to be here and, for us, it’s 100 per cent not discussable that we (allow to) leave one of the best strikers in Europe.

“Any rumours about that are absolutely nonsense and hopefully this is the last time we speak about this.”

The 28-year-old has firmly established himself as Southampton’s star performer since joining his boyhood club in 2018 following an injury-hit spell with Liverpool.

His red-hot form recently earned a recall to the international set-up, five years after he won his maiden cap.

Hasenhuttl is adamant Ings would prefer to be the main man at St Mary’s than potentially play second fiddle to England captain Harry Kane in north London.

“To be an alternative for another club or being here, the most important striker in our team – one of our own, if you want – then you know how much he likes to be here,” said Hasenhuttl

Ings has so far failed to register in two appearances this campaign.

Southampton crashed out of the Carabao Cup to second-tier Brentford on Wednesday evening after losing their opening top-flight fixture 1-0 at Crystal Palace.

Saints winger Nathan Redmond suffered an ankle ligament injury in the 2-0 midweek defeat to the Bees and will be unavailable to face Spurs.