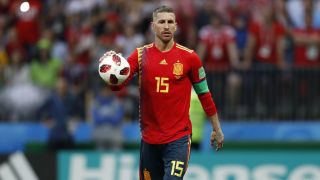 New Spain coach Luis Enrique insists he has no problem with Sergio Ramos, but has not ruled out bringing some fresh blood into the national squad.

Ramos captained his country during the disappointing World Cup campaign in Russia, as Spain were knocked out on penalties by the hosts in the last 16.

The Real Madrid defender may not be perceived as a favourite of a man who was previously in charge of Barcelona, yet Enrique intends to continue the tradition of picking the player with the most caps to skipper the side.

"I do not have any problem with any player, as far as I know," he told the media.

"There is no problem with Ramos. I have not talked to him because I need to place myself [in the role].

Enrique has signed a two-year deal to take charge, stepping into the role held briefly by Fernando Hierro following the sudden exit of Julen Lopetegui prior to the tournament.

Speaking to the media on Thursday, he declared his intention to start with a clean slate as he plans to evaluate a long list of players ahead of his first game in charge, against England at Wembley Stadium on September 8.

"My first list is 70 players, I have to do the lifting," Enrique revealed.

"I want to give my first list because there will always be surprise. We'll have a good time, you'll see.

While media reports in Britain suggested Rafael Benitez was approached about the role prior to the World Cup, Luis Rubiales - who is president of the Royal Spanish Football Federation (RFEF) - insisted Enrique was the only coach considered for the vacancy.

"I want to thank the new coach for his commitment to Spain," Rubiales said.

"I have to say he is the only coach with whom we have contacted, because we had no doubts when we thought of him."