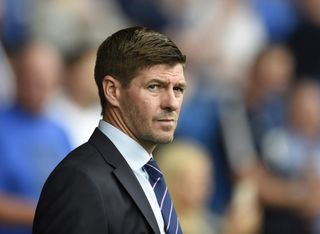 Steven Gerrard has called on Rangers to deliver a Europa League victory against Feyenoord as a tribute to former Light Blues defender Fernando Ricksen following his death at the age of 43.

The ex-Holland international, who made more than 250 appearances for the Ibrox club between 2000 and 2006, had been fighting motor neurone disease for six years and died on Wednesday morning.

Gerrard is preparing his players to face the Eredivisie side in their opening group game on Thursday evening and wants them to win the game for Ricksen.

He said: “It’s very sad news for everyone connected to the club and, more importantly, his young family. On behalf of the club I would like to pay tribute. He was a fantastic player who had a decorated career.

“I’m sure there will be a lot of emotions in the stadium tomorrow and I think Fernando deserves that. I’m sure both sets of supporters will pay their respects.

“We ask the supporters to get right behind the team because I think it would be a nice tribute to him if we can put in a good performance and try to get maximum points.

“I think everyone knows before a ball is kicked, if that was the case, we’d certainly dedicate it to him and his family.

“It’s very sad. I’m sure the supporters are very sad at this time and we who are responsible for tomorrow night’s performance want to do everything we can to try and get a win and dedicate it to him.”

Everyone at the SPFL is deeply saddened to learn that former Rangers player Fernando Ricksen has passed away after his battle with motor neurone disease.— SPFL (@spfl) September 18, 2019

Gerrard labelled Ricksen a “fantastic ambassador” for the club and said he deserves all of the warm words he has received since Rangers announced news of his death on Wednesday morning.

He added: “He played with his heart on his sleeve – he was that type. I think that was epitomised when he was taken ill in 2013, I think he was given 18 months to live at the time.

“He’s fought ever so hard up to this point. I think that sums up the character, a warrior type on the pitch and off the pitch, but we certainly send our condolences to his young family.

“He was a fantastic ambassador and role model for the club in the way he played but also how he handled himself off the pitch.

“I was lucky enough to meet him a couple of times, recently as well when you could see that he was in pain and suffering but you could see the fight he was still putting up with.

“It’s very sad news but he certainly deserves all the accolades that are going to come his way because I think he handled himself, not just as a footballer but as a human being, more importantly.”