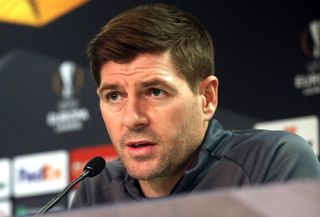 Rangers face a potential rematch with Progres Neiderkorn or their first trip to Ireland in 35 years if Steven Gerrard’s side make it through to the Europa League’s second qualifying round.

Gers suffered one of the worst defeats in the club’s history when Pedro Caixinha’s team was knocked out of the competition by the Luxembourg minnows two years ago.

And they have been set on another collision course following Wednesday’s draw in Nyon.

The Ibrox side must overcome either Kosovans FC Prishtina or St Joseph’s of Gibraltar in the first round, while Neiderkorn have two ties to play before they can think about squaring up to the Glasgow giants once again.

The team from the Grand Duchy take on preliminary-round opponents Cardiff Met University, with Ireland’s Cork City awaiting in the opening round of the competition proper.

If Cork, who have former St Johnstone striker Graham Cummins on their books, triumph it would leave Rangers looking at their first game on Irish soil since 1984 – a clash with Bohemians played out at the height of the Troubles.

The Light Blues did face Shelbourne in 1999 but the away leg was moved to Tranmere’s Prenton Park amid security concerns.

If Rangers make it through, the first leg is pencilled for July 25 at Ibrox with the return away from home on August 1, but all arrangements remain provisional.

Meanwhile, Wolves – who enter the competition directly at the second qualifying round – will play their first European clash in 39 years when they take on either Northern Irish outfit Crusaders or B36 Torshavn from the Faroe Islands.

Killie could face 🇷🇸 FK Partizan in the @EuropaLeague second qualifying round if we progress past @the_nomads#SuperKillieAwaypic.twitter.com/jKHzgscysx— Kilmarnock FC (@KilmarnockFC) June 19, 2019

Kilmarnock are gearing up for their first European campaign since 2001 and will head to Serbia to play Partizan Belgrade if they progress past Welsh side Connah’s Quay Nomads.

Aberdeen could also be on their way to a rematch with Luxembourgian opposition after being handed a potential tie with Fola Esch – who they beat 3-2 on aggregate in 2016 – or Chikhura Sachkhere of Georgia so long as they overcome Finnish outfit RoPS Rovaniemi in the first round.

Northern Ireland’s Ballymena kick-off their competition against NSI Runavik of Iceland in the preliminary round, with a clash against Malmo the prize for the winner in the first round.

Slovenians Domzale or Balzan of Malta await in round two.

Cliftonville and Welsh side Barry Town also meet in the preliminary round and the winner faces a trip to Austria to take on Sturm Graz if they can fight off FK Haugesund of Norway on the way.

Ireland’s Shamrock Rovers could end up playing Cypriot big guns Apollon Limassol or Kauno Zalgiris from Lithuania so long as they do not trip up against Norwegians Brann.

Fellow Dubliners St Patrick’s Athletic are due to meet Belarussians Dinamo Minsk or Latvians Liepaja in round two if they can find a way to topple Sweden’s IFK Norrkoping.