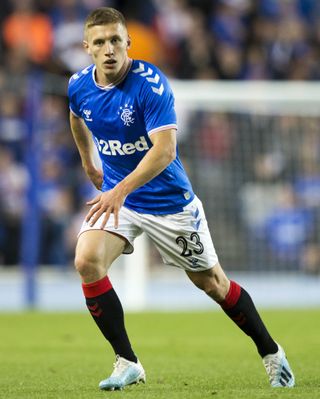 The former Scotland Under-21s ace spent Tuesday at London’s Harley Street Hospital undergoing a medical and will officially move to the Sky Bet League One club on Thursday.

The 23-year-old will put pen to paper on a three-year deal – with the option of a fourth – after being told he no longer has a role to play at Ibrox.

Tigers boss Grant McCann made Docherty a key target after being given a glowing reference on the former Hamilton youngster by his ex-Northern Ireland team-mate Steven Davis.

Hull were relegated from the Championship last month but Docherty has been reassured by McCann that he plans to lead his side back to England’s second tier at the first attempt.

The move to the KCOM Stadium is a fresh start for the boyhood Gers fan and a chance to kick-start a stalling career.

But while he was initially a regular starter under Graeme Murty, he found himself on the fringes once Steven Gerrard took over.

Docherty had hoped a successful season-long loan at Shrewsbury – where he was named the League One outfit’s player of the year – would enhance his chances back in Glasgow.

But he again struggled to force his way past the likes of Ryan Jack, Davis, Glen Kamara and Joe Aribo and spent the second half of last term with Hibernian.

And Gerrard made it clear after Sunday’s draw with Livingston that Docherty’s time at Ibrox was up.

The Gers boss – who has also allowed Ross McCrorie to depart to Aberdeen this week, with Jamie Murphy and Jordan Jones also likely to be on their way should Gers receive acceptable bids – said: “We are waiting for Greg to make a decision. Hull are at the table with a good deal and opportunity for him.

“It’s not going to work for Greg at Rangers so we are waiting on his decision.”