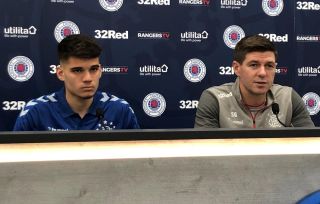 Rangers are looking to bring in a striker after completing the signing of Romania midfielder Ianis Hagi on loan from Belgian champions Genk.

The Ibrox club say they have an “exclusive option” to buy the 21-year-old at the end of the season.

With Jermain Defoe out for up to five weeks with a calf injury, Rangers are reportedly trying to seal a loan bid for Burnley forward Matej Vydra, having earlier been linked with Hibernian’s Florian Kamberi and Livingston striker Lyndon Dykes.

Manager Steven Gerrard said: “I’m doing my best to make sure there is a striker in this door before the deadline.

“People here are working as hard as we can to add in that area because right now we have one recognised number nine available. That’s not enough as we have a lot of fixtures coming up and I need to make sure we have enough firepower.”

Celtic distanced themselves from claims they were in talks with Tottenham over a bid to re-sign Victor Wanyama. They are continuing to monitor the market but manager Neil Lennon is relaxed about his deadline-day business.

Aberdeen have offloaded James Wilson to Salford and ended Zak Vyner’s loan from Bristol City after the defender suffered a shoulder injury.

Motherwell could face a battle to keep hold of James Scott after rejecting a bid of about £700,000 for the 19-year-old forward from Hull on Thursday night.

Manager Stephen Robinson said: “He’s a very, very talented young player. I said at the start of the season that I thought I would get a million pounds for him. We will hold on to him for as long as we can.

“It’s a difficult one, because you have to be fair to everybody. We sell ourselves on developing young players and selling them.

“We do it terrifically well. If you hold them back from life-changing money, it’s very difficult to keep players happy. There has to be a parameter that works for everybody – for the club for the right money and the player.”

Robinson added: “I had no intention of bringing anyone else in. If James leaves or anybody leaves, it will depend what timing that is. You have to be careful it’s the right person.”

Kilmarnock right-back Stephen O’Donnell has turned down the opportunity to move on after Oxford made a reported £200,000 bid.

Manager Alex Dyer said: “There was an enquiry for him but I spoke to him and he wants to stay at the club.”

Hearts completed the signing of 22-year-old midfielder Marcel Langer from Schalke, where he played for the reserves. Langer joins until the end of the season.

Hibernian have brought in full-back Paul McGinn from St Mirren for an undisclosed fee.

St Mirren, St Johnstone and Hamilton are all expected to make signings while Livingston and Ross County are on the lookout.