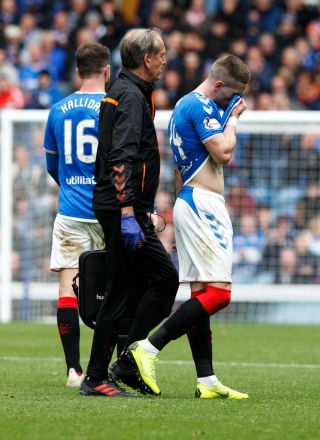 Rangers returned to winning ways as they came from behind to beat 10-man Livingston 3-1, but there was cause for concern as new signing Ryan Kent limped off.

A dominant first-half performance from Rangers, which yielded plenty of chances but no goals, ended with former loanee Kent limping off in the 41st minute after pulling up in the Livi half.

Kent was making his second debut for Rangers after returning to Ibrox from Liverpool on the final day of the Scottish transfer window in a deal understood to be worth a guaranteed £6.5million.

The visitors broke the deadlock from the penalty spot just two minutes into the second half, with Steven Lawless firing home after Lyndon Dykes had been tripped in the box by Scott Arfield.

But Rangers hit back through a James Tavernier free-kick in the 55th minute before goals from Alfredo Morelos and substitute Brandon Barker – either side of Dykes’ sending-off – wrapped up maximum points.

Rangers had the lion’s share of possession in the early stages but, while there was some positive build-up play from the hosts, it took them 11 minutes to register the game’s first shot.

Kent created the opening when he beat a defender on the left wing before finding Joe Aribo in the box, and the former Charlton man laid the ball off to Morelos but he could only fire over the bar.

After Livi’s first meaningful attack was shut down by some solid defending in the Rangers area, the hosts poured forward again and nearly broke the deadlock on the 20-minute mark.

Arfield’s curling shot from 20 yards hit the crossbar before being scrambled away to safety.

Rangers came again straight away, aiming a ball into the box towards Morelos but he could not connect with a header three yards out and the chance went begging.

The relentless hosts continued to push for an opener and Sheyi Ojo had a good opportunity in the 23rd minute when he took the ball round visiting goalkeeper Ross Stewart but he could not keep it in play.

Rangers were dealt a huge blow in the 41st minute when Kent was unable to continue and replaced by new boy Barker.

Livi made a dream start to the second half as the referee pointed to the spot just over a minute in after Arfield fouled Dykes.

And Lawless scored his third league goal of the season from 12 yards to put Gary Holt’s men 1-0 up.

But Rangers hit back in the 55th minute when Tavernier’s free-kick from the left side evaded everyone in a packed box and went straight in.

Livingston came close to going back in front in the 61st minute when Chris Erskine headed against the bar from a corner before Morelos forced a good save from Stewart with a powerful shot at the other end.

Allan McGregor was called into action in the 66th minute, keeping out a Dykes effort. And Arfield’s low goal-bound drive was tipped to safety by Stewart a minute later.

But Rangers took the lead for the first time in the game in the 71st minute when Tavernier’s corner was flicked on by Aribo and Morelos headed home from close range.

Livi were reduced to 10 men in the 73rd minute when Dykes was shown a second yellow card for a foul on Connor Goldson.

Rangers made it 3-1 six minutes later when Barker finished off a quick attack with a fine finish to mark his league debut with a first goal for the club.