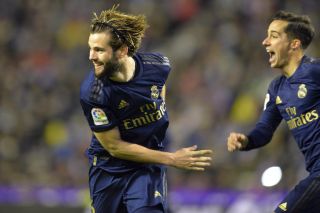 Real Madrid moved three points clear of Barcelona at the top of LaLiga after a hard-fought 1-0 win over Real Valladolid at Estadio Jose Zorrilla.

It took a late strike from Nacho to break the deadlock after a disciplined defensive display from the hosts, who could have snatched a point at the end when Sergi Guardiola was denied by an offside flag.

Madrid midfielder Casemiro also had a goal ruled out by VAR in the first half but Zinedine Zidane’s men did enough as they extended their unbeaten run to 12 games.

After a cagey start from both sides, Valladolid were perhaps fortunate not to be reduced to 10 men just 10 minutes into the game when Joaquin was shown only a yellow card for a two-footed challenge on Rodrygo.

Madrid then thought they had taken the lead in the 13th minute when Casemiro headed home Toni Kroos’ free-kick at the back post but, following a VAR review, the goal was disallowed after the Brazilian had narrowly drifted into an offside position.

Immediately at the other end, Thibaut Courtois had to be sharp to hook clear a dangerous corner from Michel from off his own line.

Madrid had plenty of the ball but struggled to break down a solid Albivioletas backline and even when they did get in behind the home side’s full-backs, Valladolid dealt easily with any delivery into the penalty area.

Valladolid offered little going forward but Courtois again had to be on his toes to turn a dangerous cross from Raul Garcia away to safety with Guardiola lurking dangerously behind him.

Casemiro then tried his luck from his distance but his effort from 25 yards drifted narrowly over the bar as the teams went into the break with nothing between them.

Valladolid goalkeeper Jordi Masip had to get down low to his left to turn away a shot from Rodrygo after he cut inside Garcia and shot from the edge of the box five minutes after the re-start.

Sergio Ramos then met a Kroos corner from the right but his header was deflected wide after from the resulting corner the ball fell to Karim Benzema but his shot slid wide of the far post.

Madrid were looking far more threatening after the interval and a searching ball forward from Isco found Benzema but he poked his effort straight at Masip.

Madrid were awarded a free-kick right on the edge of the penalty area but Isco could not get his effort up an down again and it drifted narrowly above the right upright.

Benzema got in between defenders Antonito and Kiko and on the end of a dangerous cross from Rodrygo but he could only direct his header just the wrong side of the post.

Los Blancos finally broke the deadlock in the 78th minute. Kroos’ corner from the right was only half-cleared back to the German and his return cross into the box was headed into the corner of the net by Nacho.

Valladolid had a great chance to draw level three minutes later when Guardiola was played into the box but his shot was well blocked by the covering Ferland Mendy.

Madrid were saved by the linesman’s flag with three minutes to go.  Mohammed Salisu  flicked on a corner from the left and the ball dropped for Guardiola to scoop into the net but he was marginally the wrong side of Kroos and VAR confirmed the official’s decision.