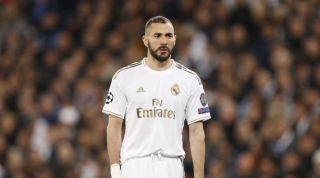 Karim Benzema has refused to back down after his criticism of Chelsea striker Olivier Giroud.

Instead, the Real Madrid star has doubled down with his comparison of his fellow countryman to a go-kart.

In an Instagram Q&A, Benzema said that he was Formula 1, while Giroud was karting.

"You can't confuse an F1 car with a go-kart and I'm being kind," the 32-year-old said, as quoted by BBC Sport.

"I know I'm a Formula 1 car. It works because he's there, that's it. It's not going to be spectacular."

Now Benzema has brought former Madrid forward, Ronaldo, into the debate as he continues to seemingly mock Giroud.

"Some people only took away things about Giroud and Formula 1, but they didn't remark what I said about what he'd brought to the French national team," the Frenchman said in another video, as quoted by Marca,

"They only focused on that, on what I said about Formula 1 and karting, but it's what I think and it's the truth.

"Look, if I was asked about R9 (Ronaldo), then he would be the Formula 1 and I would be the kart. Short and simple."

Benzema has not played for the France national team since 2015. He was dropped because of a formal investigation into his alleged involvement in a blackmail case involving an international teammate and a sex tape.

In his absence, Giroud has become the established first choice number nine, helping his country win the World Cup in 2018. The Blues attacker has scored 39 goals in 97 caps for Les Bleus.

Quiz! Can you name every club Sergio Ramos has received a card against?