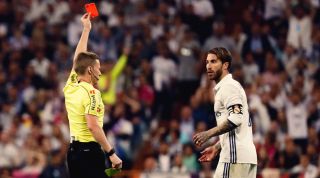 Ten minutes on the clock, 60 clubs to guess.

Some say he's one of the greatest defenders that Europe has ever seen. Others believe he's a dirty little so-and-so.

You either love Sergio Ramos or despise him with a passion, but no one can ignore him. Especially not referees. He's seen red in his time more than a Spanish bull.

As we found out on Saturday during our 3pm watchalong, the Madrid captain has mastered the dark arts of the game - so much do that he's been booked or sent off against 60 clubs. Three divisions' worth of sides. Incredible, really.

Big Serge will be receiving a fair few more cards today, as he turns 34. The question we're posing to you, is who has he been booked against?