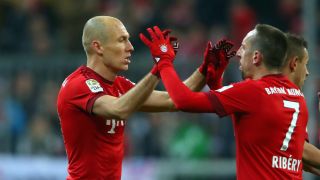 Former Bayern Munich midfielder Dietmar Hamann feels Arjen Robben and Franck Ribery are on the decline and has urged the Bavarians to bring in adequate replacements for the experienced duo.

Both Robben and Ribery signed new contracts until June 2018 earlier this season and will stay at the Allianz Arena for one additional season, but Hamann believes it is crucial for Bayern to start working on long-term replacements.

"The wide positions are the ones where Bayern need to act most. Robben and Ribery are still world class, but their performances have been declining," Hamann told AZ.

"They are simply getting older. Bayern need alternatives, players who can go for the one-on-one action. That way you create space elsewhere on the pitch. That is how Bayern have been so successful, Robben and Ribery have made the difference.

"But there are not an awful lot of players who can make the difference at this level. Alexis Sanchez could be an option."

Bayern have already brought in the likes of Douglas Costa and Kingsley Coman in recent years, but Hamann is not convinced the Brazil international is good enough for the Bundesliga champions.

"When Douglas Costa joined Bayern, he was on top of his game and had six good months. But that was it for him," Hamann added.

"Robben and Ribery have done it at the highest level for 10 years. When you are unable to perform every three days, you are not good enough for Bayern. Costa's agent is often talking about interest from other clubs and Bayern do not like that. There will be English teams who do not mind paying a lot of money for him. I can see him leave Bayern.

"I think Coman has more potential than Costa. We will have to wait to see if Carlo Ancelotti can improve him and give him enough playing time and develop him into a top player. Coman has the potential to follow in the footsteps of Robben and Ribery."