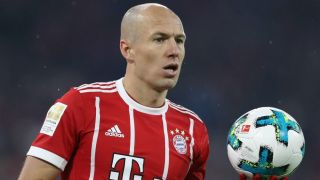 Arjen Robben is hoping to play for another two years at the "highest level" but is not getting worried about his Bayern Munich future as he approaches the end of his contract.

Robben has been at Bayern since 2009, when he was cast aside by Real Madrid, and although injuries have been a regular hindrance, he has enjoyed an immensely successful time in Bavaria.

Now 34, Robben's deal expires at the end of the season and that could see him depart the Allianz Arena in search of new challenges, despite the club planning on having discussions with him later in the campaign.

While Bayern could ultimately say they are not willing to give him an extension, Robben feels "very fit" and will not give too much thought to the future of coach Jupp Heynckes when making a decision of his own.

"Of course, this decision is not completely independent from that," Robben told Sportbuzzer.

"The coach is the one you work with every day, but I have such an open and honest communication with all those responsible here that I am not worried at all.

"The club will have a plan and then I and the club have to decide if and how it goes on.

"At the moment I feel very fit, very good and believe that I can play at the highest level for another year or two - that's my goal too."

End-of-career switches to China and the United States have been reported as potential next moves for Robben, who is giving serious thought to his future.

"That's exactly the topic at home, at the kitchen table when I talk to my family or to my friends," he said.

"It is now a phase in which I have to make decisions. A few years ago, that was usually relatively clear, but the end is approaching and I have so many thoughts - this is not easy, but it is exciting.

"There are many opportunities open. Some things I've already checked off in my head, but I'll keep that to myself."

Heynckes is due to leave Bayern at the end of the season having replaced Carlo Ancelotti in October, but Robben is keen to see the 72-year-old stay on for a further year.

"First of all, it's great that Jupp Heynckes is back," Robben added. "He, Peter Hermann and Hermann Gerland know the club inside out. They all know very well what each player needs.

"You have seen the turnaround from the first day, which of course has something to do with the coach.

"I would be happy if Jupp Heynckes still carries on, but that is his decision alone and no matter how it turns out, you have to respect that."