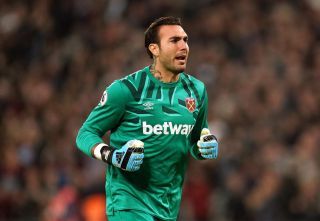 West Ham goalkeeper Roberto admitted his side are going through a dip in form but backed them to come through it.

Roberto, in the side following an injury to first-choice Lukasz Fabianski, made important saves from David McGoldrick and George Baldock.

But the Spaniard was unable to prevent Lys Mousset’s second-half volley cancelling out Robert Snodgrass’ opener for the hosts.

“We needed to win and unfortunately we didn’t, so maybe you could have the feeling it’s two points dropped for us,” said Roberto.

“It was a tough game. We knew it would be as Sheffield United play a risky game and try to score goals with all 11 players.

“We also had a few chances to close the game but unfortunately we couldn’t take them.

“The Premier League is a very long season. It’s 38 games and every team goes through different moments.

“Maybe this is a difficult moment for us when it comes to victories, but we will try to change the situation when we play at home (against Newcastle) next Saturday and start winning like we were at the beginning of the season.”

Mousset’s strike, coming on the back of his winner against Arsenal, maintained United’s unbeaten record on the road this season.

Manager Chris Wilder said: “I don’t think we had the attributes to win a Premier League match in the first half but we did in the second. I thought we had the game in our hands.

“We’ve been positive in our approach all season. Sometimes we don’t play well – but we always have a positive approach.”