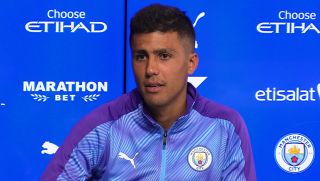 Rodrigo insists Manchester City have to “wake up” following their shock defeat at Norwich.

The Canaries stunned the defending Premier League champions as they won 3-2 at Carrow Road on Saturday despite missing a host of first-team players through injury.

Pep Guardiola’s side were guilty of a number of defensive mishaps – Kenny McLean nodding Norwich in front when he was picked out unmarked from a corner with Todd Cantwell then doubling the lead.

Sergio Aguero pulled one back for the visitors before the break only for Nicolas Otamendi to be robbed of possession on the edge of his own box by Emi Buendia, who then squared for Teemu Pukki to restore a two-goal cushion.

Rodrigo, a summer signing from Atletico Madrid, fired in a late consolation as Norwich hung on for the win to leave Manchester City five points adrift of leaders Liverpool.

“I think we lost this game because of us,” the Spain international told mancity.com.

“I think they don’t do many things to win this game. Of course, congratulations to Norwich, they play really good football, but today we gave them chances.

“That’s something we have to look at ourselves and solve our mistakes. It’s not normal. The three goals are mistakes.

“The team is working, we are down now but we have to wake up because we have matches every three days.”

Guardiola said after the game that it is too early in the season to consider the defeat as a blow to their quest to win a third successive league title – something Rodrigo agreed with.

“The season is very long,” he said.

“You are going to have matches like this, at least two or three. It’s normal. We are not perfect, and the good thing is we are at the start of the season not the end.

“That’s the only positive thing we can say. We are five points behind the leaders and that’s bad news but we are working and we will keep pushing.”