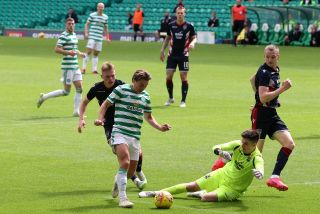 Stuart Kettlewell is confident Ross County will have completed the signing of Celtic goalkeeper Ross Doohan in time for Monday night’s Scottish Premiership opener with Motherwell.

The 22-year-old featured for the Staggies in a friendly clash with his parent club last Sunday but had to wait for Neil Lennon to complete the signing of Vasilis Barkas before he could make his one-year loan move north to Dingwall.

The deal should go through before Well, but long-term absentees Tom Grivosti and Joe Chalmers remain on the casualty list. Midfielder Chalmers has been sidelined with an ankle injury since December, while defender Grivosti last featured in October before he suffered a foot problem.

Motherwell could hand debuts to Callum Lang, Nathan McGinley, Ricki Lamie and Jordan White, while Jake Hastie is competing for a return to the team after rejoining the club on loan from Rangers.

Goalkeeper Trevor Carson is set to make his first competitive appearance since Northern Ireland’s Nations League clash with Austria in November 2018, after which he suffered deep vein thrombosis.

Long-term absentees Jake Carroll and Charles Dunne will not be back before September.