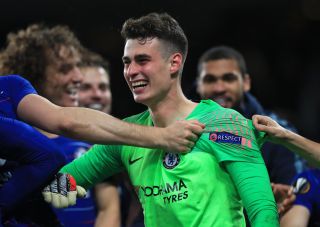 Spanish stopper Kepa incurred widespread wrath for refusing to be substituted before Chelsea lost the Carabao Cup final 4-3 on penalties to Manchester City on February 24.

But the 24-year-old pulled off two fine saves as Chelsea edged out Eintracht Frankfurt 4-3 in a shoot-out during Thursday’s Europa League semi-final second leg.

Now Chelsea will face Arsenal in the May 29 showdown in Baku, with Loftus-Cheek hailing Kepa for coming full circle from his Wembley low point.

Asked if Kepa’s penalty heroics washed away lingering concerns, Loftus-Cheek said: “Yes absolutely, I ran straight towards him at the end of the shoot-out.

“We obviously went down and he’s pulled off two fantastic saves, one between his legs that he’s just squeezed out. It’s fantastic for him.

“I was so nervous on the sideline. But it just felt amazing when Eden (Hazard) put that last penalty away, knowing we’re going to Baku for the final.”

Chelsea will finish their Premier League campaign at Leicester on Sunday, before attention quickly turns to that all-English Europa League final in Azerbaijan.

Loftus-Cheek was part of Chelsea’s Premier League title-winning squad in 2017, but admitted stepping into a European final will prove a whole new level.

10 goals this season! Double figures! ⚽ More importantly… into the final!!! 🤩🤩🤩🤩 Thanks for the electric support ⚡ See you in Baku 💙✨ #letsgochelseapic.twitter.com/nSdQF5uuds— Ruben Loftus-Cheek (@rubey_lcheek) May 9, 2019

“I’ve won the Premier League but it didn’t feel the same because I hadn’t had a big contribution to it,” said Loftus-Cheek.

“But this season the Europa League is where I’ve had most of my game time.

“So it would feel amazing to be a main player in the team, with goals and assists, to then lift that trophy.

“I don’t know what that feeling would be like as I’ve never done it. But it would be amazing.

Couldn’t have put it better ourselves, @HazardEden10! 😉#CFCAwards19pic.twitter.com/YBLNDrJKh0— Chelsea FC (@ChelseaFC) May 10, 2019

“The final’s going to be a tough one. Firstly it will just be amazing to be a part of a European final.

“It will be the biggest game of my career if I do play.

“But I look forward to it with all the excitement and fun that comes with it.

“And I think we have to do that, you know, coming into a big game like that we’ve got to be focused but also enjoy it.

“It’s such a big occasion that sometimes you can let it get to you but I think we just have to be relaxed and enjoy it and play our best football.

“Against Arsenal, another English side, will be fun.”