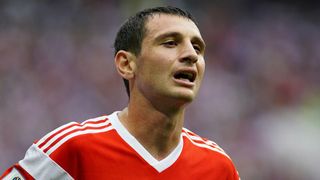 Russia will again be without Alan Dzagoev for their final Group A meeting with Uruguay, but are hopeful he can play some part in the knockout stages.

Dzagoev, his country's leading creative force in midfield, limped off midway through the first half of the hosts' 5-0 thrashing of Saudi Arabia in the tournament's curtain-raiser.

Stanislav Cherchesov's men have hardly struggled without him, though, following up that rout with a 3-1 defeat of Egypt to secure a place in the second round.

Monday's clash with Uruguay will decide who progresses as group winners and, although Dzagoev will miss out again, Cherchesov hinted the CSKA Moscow man has not been ruled out of the finals altogether.

At the stadium for training ahead of their meeting with Alan Dzagoev, who injured his hamstring in the opener, the only man not to train24 June 2018

"It is clear we were not happy having lost such a creative player as Alan but naturally when we're getting ready for a tournament we have to think about all the options," the head coach told a media conference.

"Injuries happen, yesterday he trained on the pitch, we'll not risk him, we'll observe him and not force him, each man is doing his business.

"We're not taking him with us on purpose, so his preparation will be done in full swing. We didn't take him to St Petersburg and we've not brought him to Samara."

Cherchesov was joined at the news conference by Fedor Smolov, who started the opening game but was dropped to the bench against Egypt as Artem Dzyuba took his place.

The coach rejected the notion that Smolov's presence alongside him guaranteed the striker would be starting, and suggested his yellow card when he did come on against Egypt could influence selection decisions, to avoid any potential suspensions for the second round.

"He's played for 15 minutes and he got a yellow and I don't need this for the next game and as he's stated there are 23 players and each of them must be ready to help the team," Cherchesov said.

"Each man can be in a situation when you have to clench your teeth and prove something.

"If there is a ban it's not possible, we have tried that formation [two up front] and situations are different and anything is possible. We had three forwards during the European Championship and nothing came out of it.

"The team is a mechanism and everyone has to be a part and we have to create comfortable conditions for every player to demonstrate his best abilities. If that can provide us with a good result we will do it.

"If we have two pure forwards maybe it's not the best idea [to start both] because there'll be no subs for the forwards. If there's no third forward then we'll not take any arithmetic decisions because they'd be wrong."