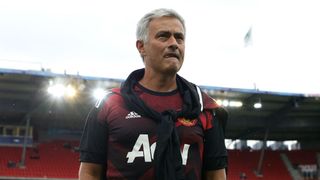 United have made a superb start to the new Premier League season, winning three consecutive games without conceding a goal.

Saha, who played in a legends team for his former club against their Barcelona counterparts at Old Trafford on Saturday, has been impressed by Mourinho's business in the transfer market.

The Frenchman thinks Lukaku understands what it takes to succeed as a United striker, while the move to land Matic from Chelsea has delighted him even more.

"I think they look like [Premier League] favourites, but it is not a sprint, it is a marathon – you have a lot of competition, a lot of games," Saha told reporters.

"They did really magic things to bring in Matic, some great signings."

Asked if Lukaku would win the golden boot this season, Saha – a winner of two Premier Leagues and the Champions League with United – said: "I think so, he looks like he has got all the players around him to fit him.

"He will get better through the season as I think he understands this club is all about winning. Not only games, but trophies. So he will know that he has to keep going and reach 20 to 25 goals.

"He definitely has the power to bring in other players to score goals. So he will definitely hope this side wins trophies.

"I think Henrikh Mkhitaryan is now more in form because he understands exactly where to go, he has got that understanding with all the players, so yes it is a great combination of getting the actual organisation of Mourinho and the talent that can express themselves in the right moment."

United head to Stoke City in the Premier League on Saturday before beginning their Champions League campaign with the visit of Basel.