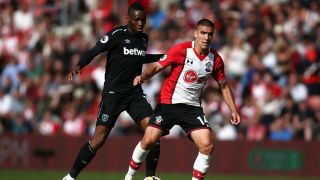 Diafra Sakho has taken it upon himself to attempt to force through a move to Rennes, undergoing a medical with the Ligue 1 side without West Ham's permission.

The forward, who joined the Hammers from Metz in 2014, has failed to build on a promising debut season in the Premier League with injuries and loss of form plaguing the Senegal striker.

In a saga reminiscent of Peter Odemwingie driving to QPR in an ultimately unsuccessful bid to hasten a switch from West Brom in 2013, Sakho reportedly travelled to Rennes to agree terms on Wednesday, despite West Ham chairman David Gold insisting the 27-year-old is going nowhere.

"Diafra Sakho is not for sale in this transfer window he is an integral part of our first team squad and will play a part in our recovery," Gold wrote on Twitter.

Diafra Sakho is not for sale in this transfer window he is an integral part of our first team squad and will play a part in our recovery. dg August 30, 2017

But Sakho, who is said to have returned to England but missed training on Thursday, maintains hope of joining Rennes before the transfer window closes at 23:00 BST.

"I have had a frustrating time for the past couple of seasons. I want a fresh start and I want to get back to playing regular football," Sakho told Sky Sports.

"I have got no issues with West Ham or West Ham fans. This is purely a footballing decision. I want to go back to France."