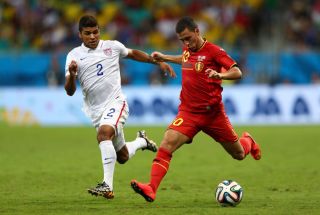 The United States international was reported to have undergone a medical with the London club last week ahead of a proposed move to White Hart Lane, which would see him spend the remainder of the MLS season with the Sounders.

And Schmid has revealed that a deal for the 21-year-old marauding full-back - who caught the eye in the World Cup in Brazil - should be announced imminently, with Yedlin then set to feature in a US Open Cup clash with Chicago Fire on Wednesday.

Schmid told reporters on Tuesday: "He will train with us today, we think everything is going to be finished and done so I expect DeAndre will start tomorrow."

Talk of an imminent switch went into overdrive on Friday after the United States international was a noticeable absentee from Seattle's training session.

And Sounders general manager Adrian Hanauer said last week that the in-demand full-back was meeting "a big club in Europe" last week but refused to reveal if it was Tottenham.

Hanauer also revealed the Sounders were negotiating a deal that would ensure Yedlin remains at CenturyLink Field for the remainder of the MLS season.

"This wouldn't be a deal where he would be transferred and immediately loaned back," he said.