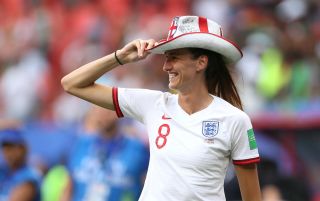 Jill Scott thinks England will encounter both a physical and technical challenge when they face Norway in the Women’s World Cup quarter-finals on Thursday.

The sides meet at Le Havre’s Stade Oceane, four days on from the Lionesses’ bruising last-16 win against Cameroon in Valenciennes.

Norway are 12th in the world rankings, nine places below England, and midfielder Scott said: “I think Cameroon brought that physicality and Scotland (whom England beat 2-1 in the group stage) brought that technical ability, but I think if you combine both of them then you get a Norway.

“That’s why it’s going to be difficult, because they can bring so many different parts to the game.

Sunday’s match, which England won 3-0, saw Phil Neville’s players get some notably rough treatment, including Nikita Parris receiving an elbow in the face early on from Yvonne Leuko, and Steph Houghton being left hurt by a poor Alexandra Takounda challenge just before the final whistle.

There was also an incident in which Toni Duggan had her arm spat on by Augustine Ejangue, and twice it looked as if Cameroon may not continue playing as they complained angrily about VAR decisions.

A FIFA spokesperson on Monday said the governing body was “looking into” Sunday’s events and would update in due course.

Scott feels England handled the game “fantastically well” and believes a key factor was the work the players have done with psychologists.

“We do a lot of work away from the pitch about how to kind of conserve our emotion in certain times in games and always think logically,” said the 32-year-old, who surpassed Peter Shilton to stand alone as England’s record World Cup appearance maker on Sunday as her tally moved to 18.

“To actually see that tested on the pitch… I thought the girls handled it fantastically well.

“We’ve had some fantastic psychologists over the years. It’s in those moments you realise without those meetings it might have been a completely different scenario.

“People always say, ‘The experienced players should be able to handle it’, but I’ve never been involved in a game like that in 140 times playing for England.

“Whether you’re experienced or not, it’s a new experience for everyone, and I’m just happy that we kept our cool on a hot day.”

Asked about the sessions with psychologists, Scott said: “We’ll just sit round and go through individually, so, ‘If you were looking at a Jill who was highly emotional, how would that look?’

“Funnily, we did it before the Argentina game (England’s second group game, which they won 1-0) and I did say, ‘Oh, it takes a lot for me to get into my red’, and then I got put to the test because Argentina were probably trying to rattle us a little bit.

“We were put to the test and came through it and I think a lot of credit has to go to the staff who work with us on our psychological side as well.”

While Cameroon showed plenty of emotion when two VAR calls went against them on Sunday, Scott admits the first occasion, when Ellen White’s finish was confirmed as a goal following a review, left her feeling unable to “get high again” to celebrate.

“At times I felt like I just had no emotion towards anything because the ball even went in at one point, it was celebrated and then it got took off us, and then I felt like I couldn’t get high again when they told us that it had (counted),” Scott said.

“I think with VAR we’re getting the correct decisions, which is the main thing – we all want fairness and you don’t want to get knocked out of a competition and sit there at home thinking, ‘If only they could have looked back at the decision’.

“But I do feel it does take away a little bit of emotion because when the ball goes in you’re constantly looking to see is there going to be a check. Is it a bad thing? I don’t know.”