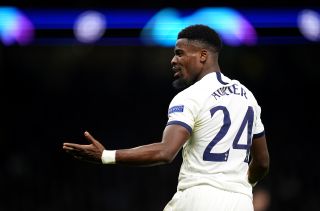 Tottenham will let Serge Aurier decide whether he will be involved against Newcastle on Wednesday.

The Ivory Coast international is grieving after his brother died in Toulouse in the early hours of Monday morning.

Spurs have one more training session on Tuesday afternoon and Jose Mourinho will speak to the right-back to assess his state of mind before the flight to the north-east on Wednesday morning.

We are with you, @Serge_Aurier 💙 pic.twitter.com/jI0vHHqfy5— Tottenham Hotspur (@SpursOfficial) July 13, 2020

Mourinho said: “Serge Aurier of course a big question mark at the moment. In this moment, what myself and other people in the club spoke with him is just about supporting a person who has a tragic family moment. Apart from that, it’s just him, his feelings, his way of reacting.

“Every person is different. Sometimes with similar feelings, people react in a different way. So we’re going to respect 100 per cent Serge’s decisions. No pressure from us.

“This afternoon, before or after training, we’ll have a better idea of what he wants to do.

“As I was saying, everybody reacts in a different way. Similar feelings, similar pain but people can react in many different ways. So let’s see.”

Tanguy Ndombele looks set to miss out with a training ground injury while Dele Alli is also not expected to be fit, despite a return to training.

Left-back Danny Rose is unable to play for Newcastle against his parent club and his long-term future remains in doubt.

It seems unlikely that he has a place at Mourinho’s Spurs, but the Portuguese has said all options are open.

“No, no decision is made. To be honest since he left, I didn’t speak with him,” Mourinho said. “His feelings are important. His happiness is important.

“Steve Bruce and Newcastle I think they also deserve to have an important word on this situation. The player is our player and he has a contract.

“So I think everything is open, and of course we are on this for a couple of more weeks, three more matches, and after that, plenty of time to make decisions.”

Spurs reignited their Europa League qualification hopes with a 2-1 win over Arsenal on Sunday, but Mourinho says it will count for nothing if they get beat at Newcastle – the only ground where he has never won as a Premier League manager.

“I know it’s a London derby, a north London derby, is Arsenal. And we showed that during the game, but now it doesn’t mean much if we go to Newcastle and lose there,” he said. “We’re OK, of course it’s a good feeling.

“I always feel you recover better from fatigue after a good result than after a bad result, but once more we’re going to have the disadvantage of our opponent playing before us. But let’s go.

“I learnt with him how to respect the people there, the mentality, what society is historically in Newcastle and around the Newcastle area.

“So apart of my awful record at St James’ Park is a club that I have lots of respect that I learnt from Sir Bobby.”